Why We Need to Protect the World’s Mangrove Forests

Mangrove forests look otherworldly. They grow along coasts by river mouths and when the tide is up, it seems improbable that trees could thrive in such a flooded scene of brackish water. When the tide drops low, their spindly, arching, barnacle-covered roots stretch like alien tentacles into dark and smelly mud so dense it could suck the boots right off you should you mistake it for solid land.

In fact, these forests on stilts are one of Earth’s most important ecosystems and serve many critical functions: buffering coasts from storm surges, preventing coastal erosion, filtering water, storing carbon, serving as a vital habitat for a great number of species, and providing food and livelihoods for local communities. 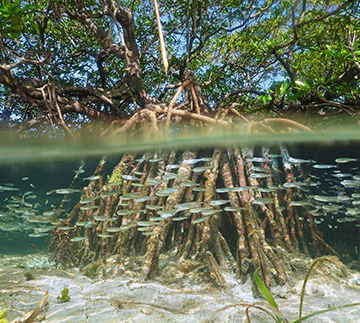 Despite the incredible value that these ecosystems provide, mangrove forests are vanishing at an alarming rate and could be wiped out forever. Fifty percent of the world’s mangroves have disappeared in the past 40 years, according to UNESCO, and continue to be destroyed and degraded by about 1% per year. At this rate, scientists predict that mangroves may be completely gone by the year 2100 unless action is taken now to protect and restore them.

UNESCO, along with the Global Mangrove Alliance, hope to turn the tide and save the world’s mangroves. July 26 celebrates the International Day for the Conservation of the Mangrove Ecosystem. Adopted by UNESCO in 2015 and celebrated annually, the initiative “aims to raise awareness of the importance of mangrove ecosystems as ‘a unique, special and vulnerable ecosystem’ and to promote solutions for their sustainable management, conservation and uses.”

For their part, the Global Mangrove Alliance – a consortium between the World Wildlife. Fund (WWF), Conservation International, the International Union for Conservation of Nature (IUCN), The Nature Conservancy, and Wetlands International – seeks to partner with stakeholders and governments around the world to increase mangrove forests by 20% by 2030.

What are mangroves and why should we care about conserving them?

Mangroves are trees or shrubs that are found along tropical and subtropical coastlines where fresh water from rivers and streams meets seawater, thereby bridging land and marine environments. They are well-adapted to living in salty and brackish water, which is one of the reasons that they are so unique.

Their most notable feature is their complex root systems that extend above and below the water line. These roots comprise an impressive filtration system that allows mangroves to filter as much as 90% of salt from seawater. The roots also allow mangroves to stabilize themselves and prevent erosion to the coastline, as well as provide a habitat for a vast array of creatures of the land, sea, and air. There are about 70 species of mangroves on Earth. The world’s largest mangrove forests are found in Indonesia, followed by Brazil, Australia, Nigeria, and Mexico.

Mangrove forests provide a wealth of benefits for people and the planet:

Why are mangroves disappearing?

One of the biggest threats to the world’s mangrove forests is pollution. Sediment, pesticides, herbicides, fertilizers, industrial chemicals, and human and animal waste all run into rivers and dump into the tidal zones. With the ebb and flow of the tides, the pollutants concentrate in the mud and roots. 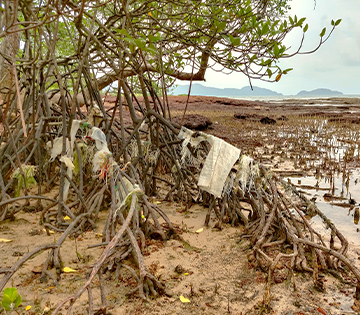 Mangroves are often cleared away to make room for agriculture like palm oil plantations and rice paddies, two crops that were responsible for 38% of the world’s mangrove loss from 2000 to 2012, especially in Asia. Much maligned as “smelly, swampy, mosquito-ridden places,” in the Americas, mangrove forests are being cleared at a rate faster than tropical rainforests. As coastal populations continue to grow, mangroves are removed to make way for urban expansion, coastal tourism projects, industrial development, and infrastructure.

There are also the threats of cutting mangroves for wood for fuel and construction, dams and irrigation that reduce the flow of water reaching the forests, and overfishing that disrupts food chains and fishing communities.

Costa Rica has about 350 wetlands, which cover 7% of the national territory. Twelve of those are designated as Wetlands of International Importance (Ramsar Sites), with a surface area of 569,742 hectares (2,200 sq. miles). Seven of them have mangroves.

The country is working to rehabilitate and protect its wetlands and mangrove forests. In 2017, the Costa Rican government launched a new National Wetlands Policy (2017-2030) to preserve Costa Rica’s 2,000-plus water sources and reservoirs.

The largest mangrove forests in Costa Rica are found in the Térraba-Sierpe National Wetlands and the Gulf of Golfo Dulce in the southern Pacific region by the Osa Peninsula. But nearly anywhere a river meets the sea you can find smaller mangrove forests all over the country.

Where to see mangroves in Costa Rica 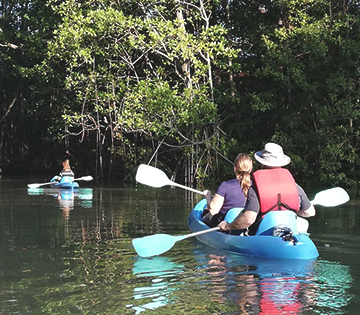 Horizontes Nature Tours offers guided tours in some of the most spectacular mangroves in its Costa Rica vacation packages. Cruise the Terraba-Sierpe National Wetlands by boat, where you can bird-watch and view exotic wildlife, on your way to Drake Bay and the Corcovado National Park. See thousands of native and migratory birds in the incredible wetlands of the Palo Verde National Park. And be amazed by the density of biodiversity in the Tortuguero National Park in the northeastern Caribbean region.

Additionally, Horizontes Nature Tours invites travelers to be part of mangrove conservation by lending a hand in mangrove planting projects at Playa Blanca in the Golfo Dulce, on the Sierpe River by the Osa Peninsula, and at Chira Island in the Nicoya Gulf.

Contact Horizontes Nature Tours for more information or use their free trip planner to create your dream Costa Rica vacation.